A Lesson in History

The Save Our Stepney Task Force took on a monumental task of building a history lesson about the Village of Stepney, incorporated into the town of Monroe, CT.  They realized the vanishing history that made this Village of Stepney such a vital part of the area’s development and today it is still the most productive part of Monroe with its residential areas, manufacturing firms, retail stores and restaurants.

The Stepney Heritage Trail was born out of a passion to preserve the past and pass it along to future generations.  SOS identified eighteen sites within Stepney that they felt held a significant position in our history and should be researched and recognized.  But how could this task best portray these moments in the past to today’s citizenry?  We researched, from many sources, the history of these sites and decided to make it available to the residents of Monroe by using the vehicle of the Stepney Heritage Trail.  The trail idea grew in momentum and soon we were raising funds to build the centerpiece, the Gazebo/Kiosk on the Stepney Green.  At the same time they realized that to have a “trail” there must be markers and plaques to identify each of these sites for viewing and reading.  So the Trail was born and today we are still fund raising and continue to work to complete it.

What is on the Trail?

The Stepney Heritage Trail consists of the trailhead Kiosk on the Green, Roadside markers at each site and/or oval Plaques placed on the existing buildings.

The Stepney Heritage Trail Information Kiosk is sixteen feet in diameter, sixteen feet tall, has a distinguishing bell shaped roof with Gothic cornice, eight pillars and a barrel-vaulted ceiling.  It sits atop of a 25-foot diameter cobblestone base, which includes a circle of engraved cobblestones.  The engraved cobblestones were purchased by local residents and businesses giving the kiosk its own trail of history as you walk around the kiosk’s perimeter and read the engravings of past and present names.  You begin to reveal the history behind the Stepney Heritage Trail as you read the two-sided interpretive panels with photographs, maps and text describing the heritage of Stepney and the historical sites along the trail.  Then take a map (available in the Kiosk) detailing the Trail and begin traveling along the Stepney Heritage Trail and take yourself back in time.  Carl Sandburg was quoted: “If we wish to have a future with greater meaning, we must concern ourselves … (with) … all that is worth preserving from our past as a living part of the present.”  We believe you will feel the same when you immerse yourself into this unique time machine. 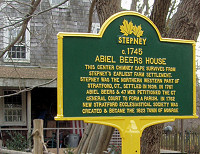 The markers are cast aluminum, two sided, 2 feet high by 3 feet wide and are heavy gauge metal.  The finish is a special paint produced to withstand inclement weather and other destructive forces.  They are mounted on a four-inch aluminum pole at a height of approximately five feet.  SOS worked with the Monroe Public Works Department to establish suitable locations at each site and the PWD dug them in.  A condensed version the historic information for each Roadside Marker is taken from the full history of each site, which you can access on the Web Site by clicking on each of the different sites to read the unabridged version.

Building markers are an option for the site owner.  SOS has made available to each site owner the option of buying a building marker to mount on a conspicuous spot on their building.  The markers are oval, eight inches high by fourteen inches wide, cast in aluminum.  A special paint is used to withstand inclement weather and other destructive forces.

Let’s start our tour of the Stepney Heritage Trail

“You are standing on a 'Place of Parade' for 'Publick Use' as it was established in 1817, now known as the Stepney Green”.

The Stepney Green serves as your trailhead to the Stepney Heritage Trail.  It is the site of an August 24, 1861 peace rally held where local pacifists called “Copperheads” protested the outbreak of the Civil War.  P.T. Barnum and Elias Howe, Jr. arrived in the night by train with a group of hired ruffians and broke up the rally.

We invite you to travel the Stepney Heritage Trail and to learn more about our local Stepney history.  Individual sites have been marked either with a freestanding site marker or an oval building marker for easy identification.  The oval markers are located on the street side of each property near a main entrance.

These markers will help you identify the significant architecture and history of Native Americans, colonists, immigrants, and other ethnic groups that are a part of the community’s history.  Please enjoy your journey throughout Stepney with our Stepney Heritage Trail Guide.

Stepney and the Stratford Connection

The history of modern-day Stepney (including areas earlier known as Birdsey’s Plain, Upper Stepney and Lower Stepney) as does the Town of Monroe itself begins in the “mother town” of Stratford founded in 1639.  Monroe was originally the northern part of the town of Stratford.  The modern-day Monroe area became part of the town of Stratford on May 17, 1671, when Stratford leaders purchased the hereditary claims to the area from the Paugusset Indians in the White Hills Purchase.

In 1762 the boundaries of what would become the town of Monroe were finally established.  That year inhabitants of the northern sections of the Ripton and North Stratford ecclesiastical societies successfully petitioned the Connecticut General Court to establish them as a new, separate religious society, called New Stratford.

But another six decades would pass before New Stratford attained the status of a fully independent town rather than a religious society.  In 1789 the New Stratford and Ripton societies were taken from Stratford to create the new town of Huntington (renamed Shelton in 1919).  In 1823 the New Stratford Society was incorporated as the town of Monroe, named for James Monroe, then president of the United States.

Farmers settled the area by the mid-1700s, but during the nineteenth century two economic “nerve centers” developed.  This economic development was largely brought about by the construction of two turnpikes and the Housatonic Railroad in 1840.  The nerve centers were known as Birdsey’s Plain and Stepney.  Main Street (modern-day Route 25) serves as the “spine” of the Stepney Heritage Trail connecting these two “nerve centers.”

The elongated grassy triangle just south of where the two turnpikes meet was the site of militia drills during the 1700 and 1800s.  Today it is known as the Stepney Green.  In 1817 it was formally set aside as a “Place of Parade” for “Publik Use,” in effect becoming Monroe’s second town green and the heart of Upper Stepney/Birdsey’s Plain.  Birdsey’s Plain grew into a bustling commercial and community center.  Here were located two churches, Monroe’s largest general store, cobbler shops, tinsmiths, and a number of large, stylish new homes.

A little more than a mile to the south on the Bridgeport and Newtown Turnpike, close to the Trumbull town line, there appeared a second nerve center, called Stepney.  The name Stepney was in use by 1740, but its origin is unknown.  The catalyst for the growth of this area was the arrival of the Housatonic Railroad in 1840.  Offering faster, more efficient, cheaper transportation than a turnpike, it spurred the development of industries that included milling and the manufacturing of carriages and shirts and the growth of stores.  The Stepney Depot became the key terminal for the delivery of raw materials and labor to the region.  Tourists and visitors from Bridgeport and New York City soon were stepping off the train in Stepney to enjoy the clean air and countryside.

The changing names of Stepney

The area of Monroe covered by the Stepney Heritage Trail has experienced its own succession of sometimes confusing name changes.  For some unknown reason, in the late 1800s Birdsey’s Plain came to be known also as Upper Stepney.  Stepney was renamed Lower Stepney to distinguish itself.  The name Birdsey’s Plain eventually faded from use.  Today the community defined by the intersection of Routes 25 and 59, Hattertown Road, and the green, originally known as Birdsey’s Plain and later Upper Stepney, is simply called Stepney.  The name Lower Stepney for the southern “nerve center” has fallen out of use.  Thus Stepney today embraces both population centers.

The Stepney Depot located on Maple Drive serves as the apex of the second “nerve center” called Lower Stepney.  Citizens residing in this area requested that the Monroe Town Council appoint a Stepney Historic District study committee, and they did appoint such a committee.

The Save Our Stepney Task Force is currently seeking funds from town businesses, private donations and through grants to complete the purchase of Roadside site markers, Interpretative panels to be located in the kiosk and the Trail Map.  We are presently at approximately 65% of our goal toward the completion.  We need your help to complete the final chapter of this history lesson.  So if your are a history buff or just believe our history should be preserved for future generations, call to find out how you can help.